Street Fighter x G.I. Joe is hardly the weirdest crossover IDW has published in recent years. Considering that there was once a line of Street Fighter II figures done in the Real American Hero format, it’s almost surprising it took comic book publishers this long to mash the two franchises together. This first issue will appeal to fans who just crave goofy fun and bombastic fight scenes. Those who prefer a complex story would be better served elsewhere.

This issue doesn’t waste a single moment on setup, essentially dropping readers into the middle of a massive tournament between the two factions. As this issue opens the tournament is already well underway, leaving readers to merely imagine how epic match-ups like Snake Eyes vs. Ken Masters might have looked. There’s a lot to be said for skipping the setup phase and focusing on action, but in this case it would have been nice to get a little more context for why Destro and M. Bison have joined forces and why these characters are fighting. 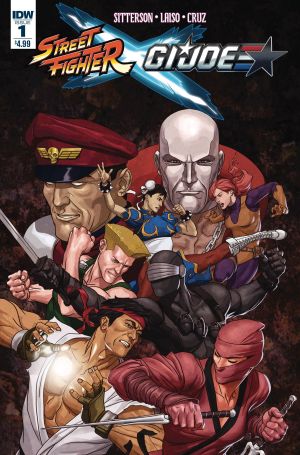 But to his credit, writer Aubrey Sitterson is under no illusions as to the type of story he’s crafting. This is a loud, goofy story of colorful fighters duking it out. Sitterson’s experience with the professional wrestling world serves him well in that regard. This story is very much in the WWE vein, with outlandish fighters calling each other out and then unleashing hell on the stage. Whether it’s Snake Eyes silently tormenting C. Viper or Roadblock grappling with the slippery Hakan, the clash of personalities is the main source of this book’s appeal.

The dynamic artwork certainly does its part, too. Artist Emilio Laiso and colorist David Garcia Cruz brings a cheerful and expressive style that perfectly captures the tone of both franchises. His fight scenes brimming with energy, and at times this issue really does look like a video game translated directly to the printed page.

Street Fighter x G.I. Joe delivers exactly what it promises, no more and no less. This is a fun, lighthearted mashup of two venerated franchises. The plot is almost nonexistent, but the dynamic art and the appeal of seeing the two groups of fighters merge is enough to justify a purchase.